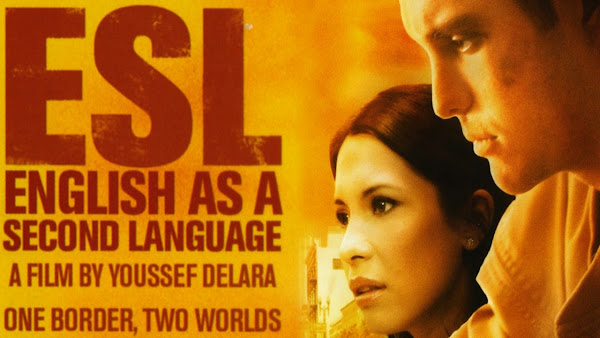 
— [http://goo.gl/v8srX6] Bolivar de la Cruz had just made the arduous journey from Mexico to Los Angeles when the wagon that was transporting him collided with a car driven by restless California club girl Lola Sara. A hard partying twenty two year-old who is struggling to balance her frivolous existence against the stern expectations of her old world mother Consuelo, Lola longs to break away from tradition and wander her own path in life. Now, as Bolivar goes to work as a male stripper and begins living the high life, Lola discovers that she is pregnant and reaches out to her newfound friend for emotional support. Perhaps if these two lost souls from different sides of the same culture can find a common ground, they can finally defeat the demons that threaten to consume them.

A stranger in a strange land, Bolivar De La Cruz has just crossed the border from Mexico in search of a better life. ESL is a beautifully rendered tale about a young man's emotional and physical struggles as he faces numerous plights in an unfamiliar and seemingly unwelcoming city (Los Angeles). We, the audience, watch as he does what he needs to do to sustain himself in a city that offers him chances to "make it," but these opportunities are dangled before him, at what might be seen as a high, "personal" cost.

This film touches upon questions concerning love, morality, family values, personal freedoms, and many other crucial issues that the viewer is invited to evaluate, as we are taken along this passionate and highly entertaining journey with a group of highly talented actors that brilliantly perform the story. (English audio) - Rating: R (Violence/Profanity/Sexual Situations/Drug Content) ::