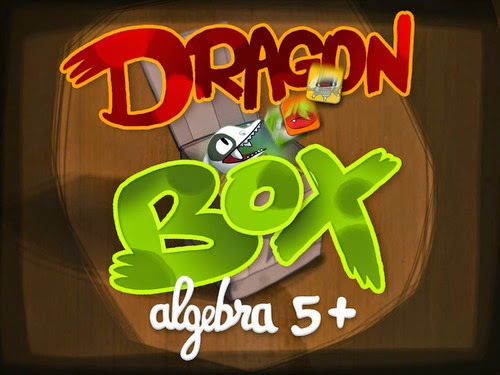 
— [http://goo.gl/7rtIMO] «I met Jean-Baptiste Huynh, the Vietnamese Frenchman living in Oslo who persuaded the entire country of Norway to spend a week solving algebra problems, a few months after his iPad algebra application, DragonBox, had gone viral in Apple’s App Store». _______________________Greg Toppo.

DragonBox Algebra 5+ Is perfect for giving young children a head start in mathematics and algebra. Children as young as five can easily begin to grasp the basic processes involved in solving linear equations without even realising that they are learning. The game is intuitive, engaging and fun, allowing anyone to learn the basics of algebra at his or her own pace.

Suitable from age five and up, DragonBox Algebra 5+ gives young learners the opportunity to get familiar with the basics of equation solving.

DragonBox uses a novel pedagogical method based on discovery and experimentation. Players learn how to solve equations in a playful and colorfull game environment where they are encouraged to experiment and be creative. By manipulating cards and trying to isolate the DragonBox on one side of the game board, the player gradually learns the operations required to isolate X on one side of an equation. Little by little, the cards are replaced with numbers and variables, revealing the addition, division and multiplication operators the player has been learning throughout the game.

Playing does not require supervision, although parents can assist them in transferring learned skills into pen and paper equation solving. It is a great game for parents to play with their kids and can even give them an opportunity to freshen up their own math skills.

Everyone I knew was asking me if I’d played it. One friend had breathlessly told me I had to get it. It teaches algebra to preschoolers, he said. It’s amazing!


But as soon as I sat down, Huynh pulled a travel-worn iPad from his bag and he said he wanted to get one thing straight about DragonBox. “It’s not an algebra app,” he said.

I soon learned that Huynh had that trifecta of a great teacher’s personality: a passion for his students and his subject, a bit of a foul mouth, and a dry, balancing wit. During our conversation, I made the mistake of asking what he thought of the school system he’d attended in France as a young man. It had gotten him pretty far, I thought. “You know what? This is a f—— prison,” he said. “Your brain is dead when you’re in prison. You don’t want to be there.” He may have sensed my shock, so he smiled and said, “I come with very strong words because I am French. I can do that.” Huynh explained that he and his colleagues at We Want To Know, the Norwegian game company he’d co-founded with French cognitive scientist Patrick Marchal, had been trying to decide whether to sell the game to schools, which were beginning to buy iPads at a steady clip. “That’s the natural place to play this game,” he said. “And we decided, ‘No, we don’t do that,’ because teachers are going to say, ‘You do that, you do that.’” In other words, he said, teachers would find a way to take the fun out of his fun little game.

So if DragonBox wasn’t about algebra, I asked, what was it about?

Speed and imagination, he said.

“Mathematics is creativity. It’s play. You take an object and you ask, ‘What if?’” But that’s not how it’s taught in schools. “We teach it as a dead subject—like Latin. A dead language. You have fantastic texts, but it’s a dead thing.”

The game board is divided into two sides, with your little dragon-in-a-box on one side. On both sides are “cards”—random images of lizards, horned beetles, deep-sea fish, and angry tomatoes. Again, don’t ask. To win each level, you must touch and tap and drag the cards to get rid of all of those on the dragon’s side. Once you do, he noisily eats everything that remains on the other side and the level is done. “The box is alone!” the game declares. The game is strange, but you keep playing. On level 12, one of the animal cards has mysteriously been replaced by a little black “a.” Five levels later, there’s a “c.” Finally, on level 18, the little wooden dragon box is momentarily replaced by a floating letter “x.” You’re doing proto-algebra. It’s been about three minutes since you downloaded the game.

This strange procession continues through 100 levels, with no explanation or elaboration. Addition, multiplication, division, fractions—all of them appear, without fanfare or explanation. By game’s end, at level 100, you’ve moved seamlessly, baby step by baby step, from a cute baby dragon eating a spiky two-headed lizard, to this: “2 over x plus d over e equals b over x,” which you solve, fearlessly and perhaps even a bit impatiently, in exactly 14 steps. You are 4 years old.

SHARE: FACEBOOK | TWITTER
The only way to change school: Jean-Baptiste Huynh at TEDxBergen :: Jean-Baptiste Huynh is founder and CEO of WeWantToKnow, creator of the award winning educational algebra game DragonBox. WeWantToKnow maintains the audacious goal of delivering K-12 mathematics knowledge to any child in 30 hours of gameplay. Huynh holds a M.Sc. in IT and mathematics and is a certified financial analyst. Before founding WeWantToKnow, Hyunh spent 10 years as a stock portfolio manager (where he promoted corporate responsibility and socially responsible investment), then became a certified math and economics teacher 5 years in Norway. With WeWantToKnow, Huynh combines his passion for entrepreneurship, applied mathematics and social impact.