ISIS Have Religious Legitimacy! — «Are they authentic muslims? Yes? No? » — (Videos/PDF) 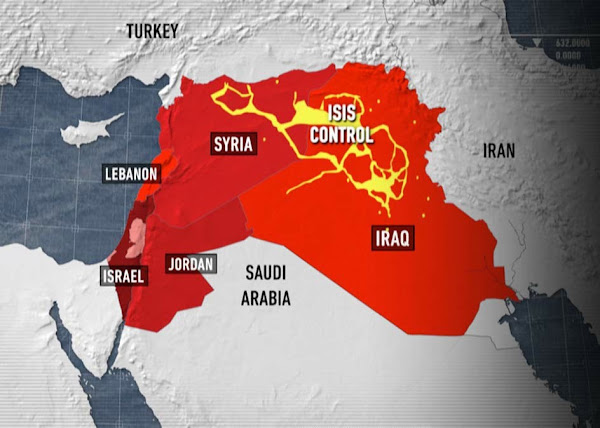 ISIS - Photo: © Institute for the study of war / illustration

"ISIS: Inside the Army of Terror" shows how the Islamic State, despite its ­"barbarians at the gate" self-image, is quite capable of picking its battles. Weiss and Hassan argue that tacit understandings with the Assad regime in particular helped the group expand. During the American occupation of Iraq, Damascus let militants transit through its territory to join the battle, which both kept the jihadists busy and dampened American enthusiasm for regional regime change. After the Syrian civil war broke out in 2011, Weiss and Hassan argue, Assad — who claimed from the beginning that the rebels were predominantly extremists — rallied non-Sunnis to his regime and reduced Western enthusiasm for his overthrow. Weiss and Hassan are not the first to make this observation, but they effectively lay out the evidence, including a mass amnesty for imprisoned militants and the Assad air force’s reluctance to hit ISIS targets. —STEVE NEGUS.

Weiss and Hassan also show that the Islamic State learned from the backlash against it by tribes in Iraq. The group’s hostility to an economy based on patronage brought it into conflict with those tribes, so the Syrian branch now allows tribes to keep concessions in smuggling and other economic activity. But today’s Islamic State is just as heavy-handed as its earlier incarnation in its rigid enforcement of Shariah law, and its insistence on being the sole arbiter of disputes between tribes. This strategy might have led to resentment, but as things turned out, tribes valued its ability to keep order and curb banditry. Here, the Islamic State’s bloodthirstiness has proved an asset: The group’s enthusiasm for capital punishment extends to its own members if they are accused of corruption, allowing it to impose more discipline on its members than on less radical rebels. Its huge foreign contingent is also valuable, since those individuals can serve as impartial moderators and, if needed, be quickly deployed for shows of force. —STEVE NEGUS.

Weiss and Hassan expect readers to know the general outline of the events they cover. Their book jumps from point to point and sometimes hangs sweeping assessments on a single analyst; it could use a lot more footnotes for its debatable assertions. But as the most serious book-length study of the Islamic State to be published so far, it may serve as the basis for a more definitive account of the group in the future. —STEVE NEGUS.

"ISIS: Inside the Army of Terror," by Michael Weiss and Hassan Hassan PDF ::