Essay — «Trump On A Collision Course With NFL Players» — [PDF] 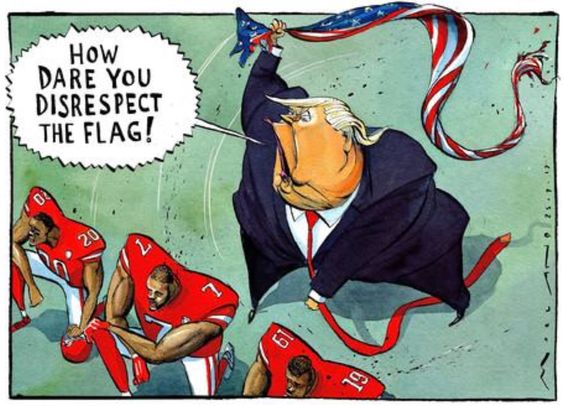 Donald Trump has reportedly signed off on launching of series of meetings with prominent athletes and musicians to discuss race, and Colin Kaepernick, the former NFL quarterback who Trump vilified while running for president, is among those on the invite list, as well as rapper Kanye West.


Kaepernick famously started taking a knee during the national anthem before NFL games in 2016 to protest injustice against African-Americans, particularly high-profile police shootings of unarmed black men. Other NFL players followed suit, starting a wave of protests from professional and amateur athletes. The protests became a flash point in the NFL last season, angering some fans and splitting owners, coaches and players on how to best address social activism, all while Kaepernick wasn't even on an NFL roster. The former 49ers starter, who was released after the 2016 season, is currently pursuing a grievance against the NFL's owners for collusion to keep him from being signed.

Trump's sentiments on the NFL are regarded as detrimental

to the progress of the game.

The president Donald Trump is headed for a possible conflict with the National Football League (NFL) players and their team owners regarding their posture during the singing on the United States national anthem before games. (Background issue)

by Trump has created a lot of uproar from the public regarding the issue.

The NFL athletes kneel during the singing of the national anthem. According to Trump, the posture adopted by the NFL players is a sign of disrespect to the country and the national flag. (Current Situation)

This essay puts forward the claims that Mr. Trump has the right to express himself on whatever issue he deems

convenient. Additionally, the President of the United States represents the ordinary Americans who are against wealthy NFL players. However

, his past relationship with the NFL fraternity may have prompted

his attack on the athletes. (Telling your readers what the paper is about/ guides your writing and keeps your argument focused/ Thesis statement)

Trump has a constitutional right to express himself regarding the kneeling of the NFL athletes during the National anthem. (Positive case) However, consistently directing his grievances

to the team owners can result in a collision. (Counter-argument) Hamilton (2017) claims that Trump stated his displeasure with the team owners for not taking action against the NFL players who are adamant

to maintain the kneeling position during the narration of the national anthem (para.1). Furthermore

, Trump perceives them as cowards in enacting

to the athletes’ position when the American national anthem is being sung. (Supporting evidence) During Donald Trump's rally in Alabama he created a public debate by stating that he would like to witness the team owners dismiss the players who disrespect the national flag. He has continuously called on the team owners to provide the leadership to the NFL teams by regulating the players to prove their loyalty to the nation and their class.

The real reason for the conflict is that Trump has not been in a good relationship with the NFL. Furthermore, the issues with NFL extend from personal to financial matters. (Negative Case) He believes the inability

of the team owners to implement

his recommendations is a conflict with his person. In the 1980s, Trump thought the NFL was susceptible

, he joined the USFL and influenced the postponement of the football season from to the fall (Hamilton, 2017, para.7). (Supporting evidence) Consequently, the result was disastrous, and NFL continued to dominate the sports environment. Afterward, USFL presented their case before the court regarding NFL dominancy with Trump being at the helm of the court case. As a result, the court ruled in favor of the USFL, but it eventually collapsed.

a war of words against the NFL players are motivated by numerous factors such as that the players are wealthy and he represents the ordinary Americans who are against the lump-sum payment given to the players. (Positive Case) Significant numbers of the players are black, and Trump tries to connect the kneeling down during the singing of the national anthem to lack of patriotism (Cillizza, 2017, para.6). However, patriotism is all about pledging

the loyalty to the country and not an individual. The American flag represents the right to uphold the citizen's actions enshrined

in the constitution. (Counter-argument) Therefore, the contentions

prompted the meetings between the players and the owners with the objective of addressing issues that affect the African American players (Myers, 2017, para.7). The constant rebuke

by Trump fostered the relationship between the NFL players and their managers when they come out openly to defend them. To solve the stalemate

between Trump and the NFL, productive meetings should be held to address the issue because Trump believes that it is his right to express his opinion in public and the kneeling has been a norm for the NFL for a long time. The managers agreed to use their resources in ensuring the players stood when reciting the anthem. However, all stakeholders

should be involved in solving the problem in entirety.

on the NFL players is regarded as a retrogressive

the progress of the sport. (Negative Case) Consequently, The NFL players and the owners are united against the criticism. According to Grinberg (2017), the Redskins owner Dan Snyder was reported to have stood with the players as a sign of solidarity against the criticism imposed against them by Trump (para.2). Therefore, significant numbers of fans were displeased by the anthem debate and decided to stay away from the games and there was a decline

in the revenue generated by the games. (Supporting evidence) Therefore, the issue required a primary address. The owners attempted to convince the players to desist

from kneeling during the anthem to mitigate

the problem. The protests about the national anthem began when Colin Kaepernick failed to arise during the singing of the national anthem as a sign of displeasure with the police brutality against the African American people. Following the action, Trump incited

the fans to boycott attending the NFL games until they begin to respect the national flag by standing during the narration of the anthem.

As it can be seen, there is an imminent

collision between Trump and the NFL players and owners —they are on a collision course— because of the constant attacks on their kneeling while the national anthem is sung. Consequently, the criticism by Trump has strengthened the bond between the players and managers. Protests have also been prompted by Trump's sentiments that caused unrest amongst the NFL players and the fans. Many supporters stayed away from the games that caused a reduction in the revenue generated during the games. The issue was mitigated by the intervention by the owners to encourage the players to stand during the citation of the national anthem. (Summarization) However, the ongoing