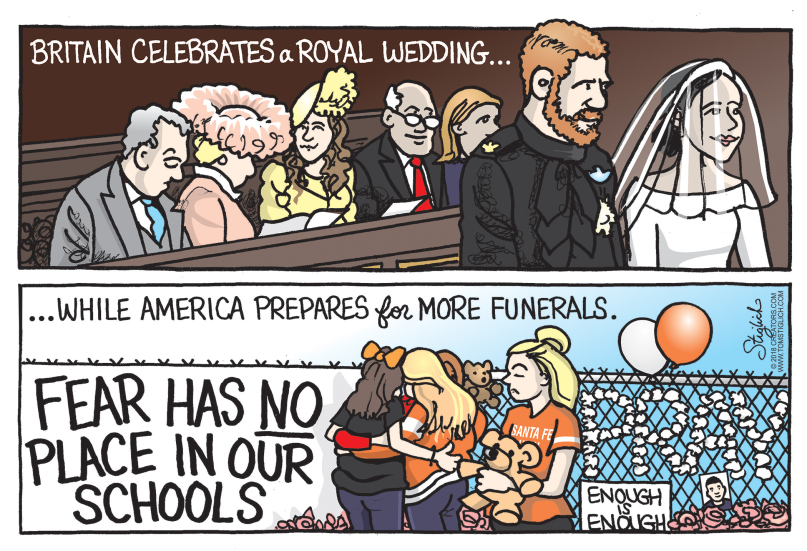 One of my students in the ESL, English as a Second Language Classroom, has allowed me to share her Mock exam/essay as an example of how one should write a paper. This exam was graded 6 by two different English teachers.

Trump initially voiced support for universal background checks and raising the age limit on certain gun purchases. However, neither was addressed in his administration’s proposal.

The White House has denied that the president had "chickened out" in the face of pressure from the NRA, which met with the president and opposed gun law reforms.

Collision Course Over US Gun Regulations; A 5 Paragraph Essay, PDF ::

School shootings are a common occurrence in the United States today. (Attention getter)

Moreover, statistics show that in ten days, there are nine days of gunfire reported in America. What is more, on each day, seven American young people are shot (The Guardian, n.p). (Background issue)

The horrifying mass killing in Parkland, Florida, reported at Marjory Stoneman Douglas High School on 14th of February 2018, led to different reactions amongst the people and brought up the debate on US gun regulations again (Aonso, n.p). However, this time, the teenagers themselves are demanding stringent gun laws that will curb the issue. (Current Situation)

Emma Gonzalez, a student at the High School in Florida where the shooting occurred, held a speech where she called for comprehensive gun control policies on behalf of the students (Reuters, n.p). (Implications)

Thus, teenagers are on a collision course with the National Rifle Association (NRA), who believes in the constitutional right of people to own arms. Nevertheless, both parties know that school shootings are a state of difficulty that needs to be resolved, but they disagree on how to tackle the issue. (Telling your readers what the paper is about/ guides your writing and keeps your argument focused/ Thesis statement)

Students across the US believe that stringent gun control laws will reduce gun deaths. (Positive case) The notion can be supported by statistics from countries where guns ownership is controlled, and there are almost no mass shootings as compared to the US, where there are minimal gun regulations (Stephens, n.p). (Supporting evidence) According to Alex Wind, who is one of the founders of the students group named Never Again movement, it is " [a]bsolutely insane that a 19-year-old cannot purchase alcohol but can walk in and buy an AR-15 - a weapon of war, by all means, a weapon of mass destruction." (Cooper, n.p) (Supporting evidence) Therefore, they believe the acquisition of the powerful guns should be banned because they lead to the death of many people in murder cases. Besides, the ownership of deadlier weapons leads to more shootings, injuries, and fatalities by increasing the chance of accidents and violent outrages. (Implication supports positive case) [Views and arguments of the opposing side, the students]

The NRA believes that more guns will solve the gun issue. (Positive case) Moreover, all Americans have the constitutional right of owning arms. In addition, the gun culture has been an American tradition since the Second Amendment. Firstly, since so many American citizens already have one or several guns, it is not fair that people do not have the right to protect themselves. (Supporting evidence) Therefore, the most effective way to stop a shooter is with a gun, which will limit the number of victims if a shooting occurs. The head of the NRA affirms that it is the responsibility of a noble person with a gun to prevent the evil person with a weapon from claiming many lives. Secondly, they believe it is not the guns and gun regulations in the US that is the primary issue to this problem but the security around the arms. (Supporting evidence) If the police do their work effectively, no mentally ill people should get hold of a gun. Additionally, if the school security was better, lives could have been saved. As an illustration, if one teacher had had a gun at the Florida school shooting, he could have stopped the shooter. (BBC News, n.p) (Implication supports positive case) [Views and arguments of the opposing side, the NRA]

Consequently, the opposing arguments have led to a collision course between the students and the National Rifle Association. (Negative case) Hence, it is crucial tackling the situation in a wise way to avoid an eminent conflict since there are two possibilities. Either one of the parties must back down, or they must compromise and find a way that works for both parties. However, considering the situation today, the first option is almost impossible because both the students and the NRA are dedicated to their cases. Hence, a compromise could be that the US implement gun regulations but keep the Second Amendment, which gives the people the right of owing arms. (Counter argument) Donald Trump, who has for a long time sided with the NRA and got criticism from the students, is now in favor of improving background checks for gun buyers (Rampton & Ayesha, n.p). (Positive case) Besides, other suggestions can be the gun owners reporting a missing gun, as well as having a license. It should also be mandatory to have safety feature and a locking device for the arms. Another suggestion the students are fighting for is to implement restrictions on the powerful guns, namely the AR-15 which was the murder weapon used in the Florida shooting. [A reflection on how a conflict can be avoided]

All things considered, the Florida school shooting led to an outpouring of anger and action from the students themselves. They demand stricter gun laws. However, this has put them on a collision course with the National Rifle Association, which believes that the solution to the gun issue is more guns. Besides, America today has a gun culture, and they believe that people have the right of defending themselves with a gun. (Summarization) Therefore, the removal of the Second Amendment might deny some people a sense of security. Nevertheless, the students' arguments against the NRA with statistics prove that more guns equate to more shootings and more gun-related deaths. Hence, to avoid the situation turning into a full-blown conflict, the parties should look for various solutions and enter a compromise agreement, which is good for both parties. (Implication) Despite the arguments, the parties claim they have the same goal, which is to reduce gun deaths. Moreover, by implementing a few gun laws, one can see if it contributes to less gun related incidents without shutting out the other party's opinions completely. (Conclusion, Claim)

• [7] The Guardian. “The Guardian View on US Gun Laws: Listen to Teenagers, Not Trump | Editorial.” The Guardian, Guardian News and Media, 22 Feb. 2018, theguardian.com/commentisfree/2018/feb/22/the-guardian-view-on-us-gun-laws-listen-to-teenagers-not-trump