Power of — and Restraints on Presidents and Prime Ministers

Economy: Sir Geoffrey Howe speech draft on trade unions (MT: "the press will crucify you for this"). 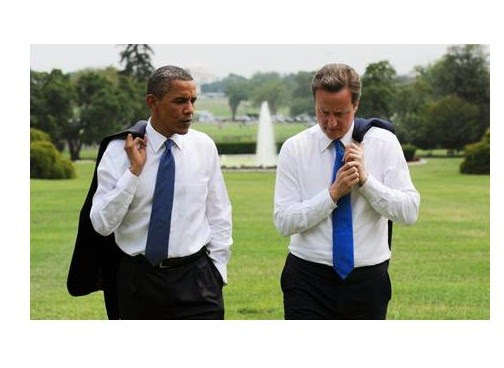 UK Prime Minister vs the US President - Photo: The Guardian UK

'The Iron Lady', Margaret Thatcher, who had won all her three elections, fell from power in 1990 when her Cabinet colleagues lost confidence in her ability to lead them (Howe, 1990). The main quarrels with Thatcher's Cabinet, it is said, were due to an unpopular or hated local tax which she decided to introduce as well as her increasingly anti-European approach. The independent resources or Powers that a UK Prime Minister has, lies in his or her combined role as a Member of Parliament, chief legislator, and commander of a majority within the House of Commons (the lower house of the legislature) (Watts, 2003:83). Indeed, if Margaret Thatcher had not been in this incredibly strong position, she would not have been Prime Minister longer than anyone else in the 20th century. (Watts 2003:68,76; Burns, 1992:10,116-118; Troitiño:Thatcher and the EU; Moore, 2010:The Telegraph; Pearce, 2012:historytoday.com). Both the Prime Minister and President have similar roles within their domestic systems (being "chief executive"). Beyond their executive function, however, the UK Prime Minister's domestic Powers appear to extend further and further ahead of those of the US President.

The introductory paragraph includes a worldwide famous UK Prime Minister in order to get the reader's attention (Margaret Thatcher). The second sentence leads up to the thesis statement ("to have an incredible legislative strength") which is the third sentence. The thesis statement (sentence 3) presents topic of the paper to the reader and provides a mini- outline (Parliament, legislator, House of Commons). The topic is who is more powerful, the UK Prime Minister or the US President? (Watts 2003:82,83) The mini- outline tells the reader that this paper will present a UK Prime Minister stronger than his or her US colleague: (1) UK PM is a member of Parliament, he or she leads the Cabinet (the Executive) which means that the incumbent UK PM wields executive powers. The Parliament alone possesses legislative supremacy and thereby ultimate power over all other political bodies in the UK and its territories; (2) the incumbent UK PM wields legislative powers; and (3) the incumbent UK PM commands a majority in the House of Commons, which means that he or she guides the law-making process with the goal of enacting the legislative agenda of their political party. The fourth sentence supports the thesis statement of third sentence. The last sentence of the introductory paragraph uses the words "Prime Minister" and "US President" as transitional hooks and at the same time it looks back to the thesis statement of third sentence.

In the British parliamentary system, the executive include the Prime Minister and the Cabinet whom the prime minister picks from Members of Parliament, all of whom are responsible to Parliament. Thus, the Prime Minister is part of the legislature and has party supporters who will usually support the measures he or she introduces. The Prime Minister does not only appoint his or her Cabinet. He or she has patronage elsewhere such as the appointment of junior ministers. Powers of patronage are particularly important, as they provide a carrot for a Prime Minister to dangle before potentially rebellious the House of Commons (Watts, 2003:95).

As the constitution states, "the executive power shall be vested in a President" (U.S. CONST. art. II, § 1, cl. 1), not a President and his cabinet. Even so, the President uses a cabinet, which is narrowly provided for by the US constitution (U.S. CONST. art. II, § 2). In the US presidential systems the President acts as a single executive. In the United States the President appoints Cabinet members to work with him, practically anyone they like (as long as they are approved by the US Senate). In the US neither the President nor his Cabinet officers are members of congress (Watts, 2003:68,83). The President makes Supreme Court nominations, subject to approval by the Senate. The President can sign treaties, subject to ratification by the Senate (Watts, 2003:84). The President is 'Commander in Chief' of the armed forces, whose funding comes from Congress. The president is also chief legislator - Presidents can recommend measures to Congress – and increasingly put forward packages of proposals to Congress, but any legislation must be passed by Congress. Consequently, the President has very little independence, despite being Head of State.

The UK Prime Minister has indeed great political power, but this power is balanced by the fact that there are important constraints on Prime Ministerial power. As we have seen, Margaret Thatcher's case, ironically, the most significant restraint comes from the party he/she represents. Apart from being restrained by his/her own political party, there other factors that weaken the power of a UK Prime Minister, such as work overload, the public opinion, the Media support.

The Prime Minister's Powers of appointment are limited by the need to provide a balance of party views. The Cabinet must be representative; therefore, when the Prime Minister picks his or her Cabinet he or she must ensure that it contains cross-section of opinion. There must be women, ethnic minorities and people with support amongst wider party (Holmes 2008:435).

There are also constraints placed upon the Prime Minister in his appointment and chairing of Cabinet meetings. The Prime Minister due to his workload is only able to chair a few committees, so Senior Ministerial Colleagues chair the rest, thus reducing the Prime Ministers input in other departments greatly. In this way he or she limits his or her power (Holmes 2008:422).

One factor which may limit the powers of the Prime Minister is when the public begins to have the opinion that he or she looks weak. Then it takes a lot for his or her reputation to be built again. Another limitation is the media. When a leader loses the confidence of the public and of the media they can become an electoral liability (Holmes 2008:425).

An issue with British politics for the Prime minister is that it has no fixed terms (Watts, 2003:84). This means that the opposition can pressure the Prime Minister to call for a general election at any point they wish, either through the media or by calling a vote of no confidence, where defeat for the government would give an automatic general election.

"The President of the United States of America", may be the quick answer when we ask who is more powerful, a UK Prime Minister or the US President. Even though a UK Prime Minister has unlimited Powers in a number of significant ways, it is he or she who has less restraints within the two political systems. In practice, this means that a Prime Minister can force through almost any legislation, and therefore control British statute. Therefore, any UK Prime Minister can be in a position of incredible legislative strength compared to the US President. Under the British political system there is a unity of powers (Walter, 1867:68) whereas in the United States there is separation of powers. Both Margaret Thatcher and Tony Blair were able to push through a welfare reform programme, while Bill Clinton during his presidential terms was not able to do the same in health policy. By comparison, White House powers are more constrained than those from Downing Street.

• Holmes, Peter (2008) Introducing Politics for AS Level . Retrieved from polity.co.uk/holmes/chapter/summaries/ on October 2014

• Moore, Charles (2010) Margaret Thatcher's resignation: A career that did not die in vain. The Telegraph. Retrieved from www.telegraph.co.uk on October 2014.

• Prakash, Saikrishna (2003) The Essential Meaning of Executive Power. . Professor of Law, University of San Diego School of Law. Retrieved from illinoislawreview.org on October 2014