Thanksgiving: A Myth — «Everything You’ve Been Taught About Thanksgiving is A Lie» — (PDF/Videos) 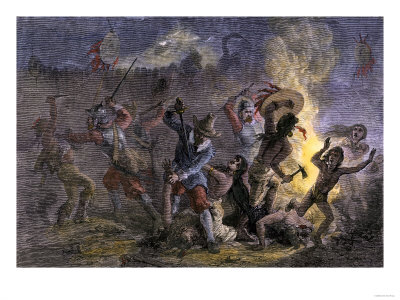 Myths propagated about a supposed feast between Native Americans and the Pilgrims ignore the brutal history of why the Thanksgiving holiday was created and the horrific acts that its founders intended to celebrate. Here are 4 facts that bust the myths surrounding the origin of the holiday.

1. William Bradford wanted a holiday to give thanks to mass slaughter.


William Bradford, then-governor of Plymouth, was intent on claiming the land for the white settlers and sought to completely eradicate the Native Americans whose land they were occupying. Bradford truly believed in the punishment-heavy religious traditions taught by those like Richard Baxter and viewed the Indians not as human, but agents of demonic forces, describing them as “savage people, who are cruel, barbarous, and most treacherous.”

In 1637, the war on the Pequot villages of Southeastern Connecticut began, and settlers savagely slaughtered Pequot men, women, and children by the hundreds. Bradford’s own notes described the savagery of his men in graphic detail:


“Others ran into their houses, and brought out fire, and set them on fire, which soon took in their mats, and, standing close together, with the wind, all was quickly on a flame, and thereby more were burnt to death than was otherwise slain,” Bradford wrote. “Those that escaped the fire were slain with the sword; some hewed to pieces, others run through with their rapiers, so as they were quickly dispatched, and very few escaped.

It was conceived they thus destroyed about 400 at this time. It was a fearful sight to see them thus frying in the fire...horrible was the stink and scent thereof, but the victory seemed a sweet sacrifice, and they gave the prayers thereof to God, who had wrought so wonderfully for them.” —Bradford's History of Plymouth Plantation, pp. 425-426

After some 500 Pequots were slaughtered in massacres in May, June, and July, Bradford declared victory in November and stated that the massacre of the Pequots would be a holiday celebrated by all white settlers, writing:

“For the next 100 years, every Thanksgiving Day ordained by a Governor was in honor of the bloody victory, thanking God that the battle had been won.”

2. Squanto was kidnapped and forced into child slavery.


The famous story of Squanto, the kind Wampanoag man who learned English and helped the Pilgrims learn how to survive through the winter, is incredibly misleading. Squanto was first captured as a boy in 1605 and sold into slavery in England. He was later able to convince a merchant he worked for to allow him passage back to his people in present-day Massachusetts.

But despite Squanto’s best efforts to escape and live free, he was kidnapped again by British slave traders and again enslaved in Spain. After several more years, Squanto managed to talk his way into a ship back to England, and then proceeded to get on a ship headed to Cape Cod in 1619. Squanto learned English not to help white people grow crops, but as a necessity to escape slavery and get back to his homeland.

3. The Pilgrims were against religious freedom.


If there was one thing the puritans wanted, it certainly wasn’t religious freedom. Their interpretation of the Bible was particularly strict, and the Pilgrims strongly believed others who practiced different beliefs were doomed to be cast into hell. One example of puritan religious leadership was Richard Baxter, who cited Jesus’ parables in Matthew 25 as one of the defining scriptures that clearly differentiates between the benefits obtained by true believers and the punishments meted out to those who didn’t adhere to the Word of God. Baxter also preached the importance of 2 Thessalonians 1, verses 8-10, which reads:

8 He will punish those who do not know God and do not obey the gospel of our Lord Jesus. 9 They will be punished with everlasting destruction and shut out from the presence of the Lord and from the glory of his might 10 on the day he comes to be glorified in his holy people and to be marveled at among all those who have believed. This includes you, because you believed our testimony to you.

The puritans didn’t evolve past their fundamentalism, either. A descendant of the first puritan settlers was Jonathan Edwards — the first-ever “fire and brimstone” preacher who penned the sermon Sinners in the Hands of an Angry God. Among other things, the sermon preached that everyone was doomed to an eternity in hell unless they completely gave in and practiced the strict interpretations of Puritan faith.

God is not altogether such an one as themselves, tho’ they may imagine him to be so. The Wrath of God burns against them, their Damnation don’t slumber, the Pit is prepared, the Fire is made ready, the Furnace is now hot, ready to receive them, the Flames do now rage and glow. The glittering Sword is whet, and held over them, and the Pit hath opened her Mouth under them. —Sinners in the Hands of an Angry God. A Sermon Preached at Enfield, July 8th, 1741

Even after 1741, when this sermon was originally delivered, this extremist form of Christianity remained strong and was deeply-represented in the first federal governments. Edwards’ grandson, Aaron Burr, served as Thomas Jefferson’s first Vice President, from 1801 to 1805.

4. The Pilgrims were the first illegal immigrants.


As Ric Burns recently explained in an interview with the Mother Nature Network, the Pilgrims were originally chartered to sail from the Old World to Virginia by the Virginia Company, but they ended up in Massachusetts due to dangerous waters. This was far north of their originally charted route, technically making them some of the first illegal immigrants in North America.

Along with bringing their religious beliefs, the first white settlers in America brought along foreign germs, which, starting in 1616, caused a plague that killed between 50 percent and 90 percent of Native American populations all the way down the Eastern Seaboard. This is part of what made it possible for the Pilgrims to maintain their foothold on the land they occupied — previous voyages by Norsemen in the 10th century were unsuccessful, as they were hopelessly outnumbered before the European-induced plagues of the 17th century.


"BRADFORD'S HISTORY "OF PLIMOTH PLANTATION." FROM THE ORIGINAL MANUSCRIPT," WITH A REPORT OF THE PROCEEDINGS INCIDENT TO THE RETURN OF THE MANUSCRIPT TO MASSACHUSETTS. PDF ::

"A People's History of America," by Howard Zinn. PDF ::


Youtube Playlist: The Truth About Thanksgiving - National Day of Mourning ::

• [1] Bradford. Bradford's History of Plymouth Plantation, written between 1620-47 but not published until the nineteenth century. Print.

• [1] Cahill, Tom. Tom Cahill is a writer. He specializes in coverage of political, economic, and environmental news . Web.