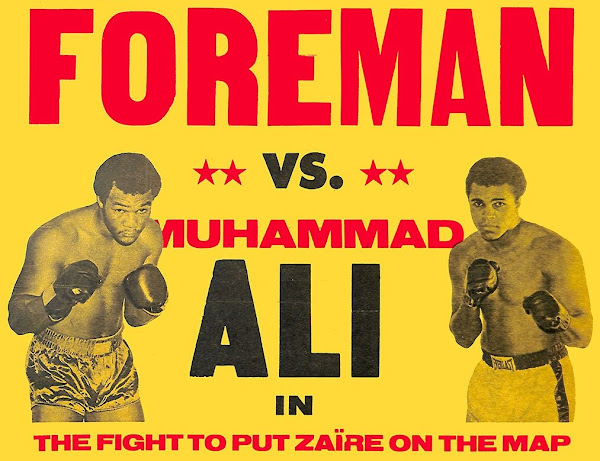 
:: RT: Foreman vs Muhammad Ali ▶ https://goo.gl/7nzFDy ◀ «The Rumble in the Jungle is one of Ali's most famous fights, ranking alongside 1971's Fight of the Century between the unbeaten former champion Ali and the unbeaten then heavyweight champion Joe Frazier, and the pair's final match, the Thrilla in Manila in 1975. The Rumble in the Jungle remains a large cultural influence.» | #BrE #BritishEnglish #RP #UK #English #LukesPodcast #Speaking #ESLclassroom #GeorgeForeman #MuhammadAli #ElRugidoDeLaSelva

George Foreman and Muhammad Ali became friends after the fight. Muhammad Ali had trouble walking to the stage at the 1996 Oscars to be part of the group receiving the Oscar for When We Were Kings (1996), a documentary of the fight in Zaire, due to his Parkinson's syndrome. George Foreman helped him up the steps to receive the Oscar ::

MP3 — In the episode you'll hear a biography of Ali and then lots of descriptive detail about the fight, exploring exactly what happened in and out of the ring and why he is now considered not only one of the greatest boxers but one of the most outstanding people of recent times. ::